First, let me give a shout-out to those of you who have recently chosen to follow my blog. Welcome! I’m so glad to have you join us. As you can see from the title of this blog, my posts are scattered between my passion for writing, knitting, creating paraphernalia for my 16” fashion dolls, and sharing whatever God happens to lay on my heart on any given week. So whichever kind of post drew you to follow me, rest assured there will be more like it.

But maybe not today. 😉

Today, I’m sharing my latest knitting adventure. Most of you know my debut novel, Tinsel in a Tangle, is releasing in October through Clean Reads. It will initially be available in digital form, so while I scratch my head trying to figure out ways to have a launch party and promote my book without having something physical to hold or hand out, I’m dutifully working on some mini-helpers that should bring a smile to some faces—and maybe a sale on Amazon. (Hey, I have to be optimistic, right? Hoping the act of writing it out will help cement it in my brain.) 😛

Everyone, please meet Niklas, Santa’s cocky grandson who has become skilled over the years in the art of exasperating Tinsel.

The pattern I used for the body comes from Knitted Pirates, Princesses, Witches, Wizards & Fairies, by Annette Hefford. While Annette recommends using Light Worsted, or 4-ply, yarn and US size 3 needles for most of the work, her dolls end up being 18” tall, and I didn’t want mine that big. I also wanted to use Palette yarn from Knitpicks.com, as they offer a huge range of colors, but it’s only 2-ply yarn, so I decreased the size of my needles to US size 1. The feet are knitted first, then set aside. The legs are knitted separately, then joined at the crotch area to continue up through the torso and head. 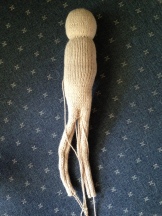 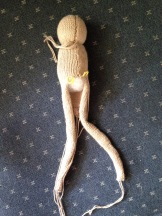 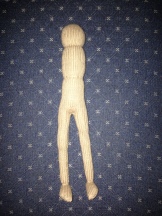 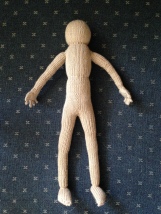 Out of all the pieces to this doll, the hands were the hardest to knit and sew, but they went fast–and they weren’t the most difficult things I’ve had to knit (my Ravenna satchel was far more cantankerous). Still, I wouldn’t recommend this project to a beginner knitter.

The long piece in the upper left-hand area gets folded over beneath the fingers. 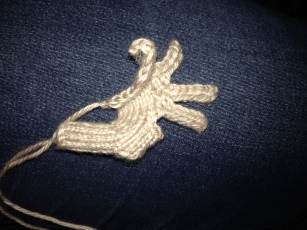 The cast-on and cast-off edges of the fingers get pinched and sewn together.

The hair is actually a wig, knitted separately using a double-loop stitch. I will admit my hands ached after the first few rows. You can see from the picture below how much bigger the wig looks compared to the head, and I was worried I had done something wrong, though I couldn’t have told you what. But once you run a gathering stitch around the edge and pull it snug to the head…it works beautifully! (Cut the loops for straight, wild hair, or keep the loops for a “curly” effect.) 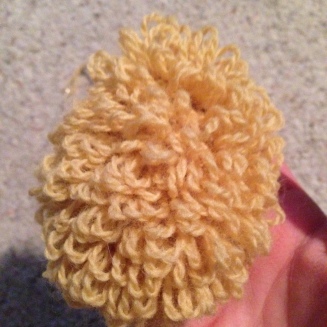 Wig with the loops before I cut them.

Inside of the wig.

Stuffing the legs and arms was quite the feat, as well, given how small an opening I was working with. I had to use the eraser-end of a pencil to stuff the filling, and at times I rolled the limbs as though rolling play-dough into a snake.

And it took me so long to finally sit down and write this post, that I can actually introduce you to an almost-completed Tinsel:

To keep her legs from looking too chunky, and knowing I wanted her to “wear” stockings, I decided to knit her legs as just that: stockings. I also knitted her legs, body, and arms in-the-round, using the Magic Loop Method, rather than knitting them flat and having to sew up the seams afterward. You can see the difference here in their arms:

Tinsel has no seam…

Later today, I hope to embroider Tinsel’s face, and this weekend, I hope to start on (complete?) her wig.

What about their clothes, you ask? Ah, yes, well, that’s where Part II comes in. Once I complete both dolls, then I get to move on to knitting their shirts, shoes, lederhosen, dirndl, and, of course, their coats, hats and mittens. Because living as far north as they do, winter gear is kind of a necessity. 😉

7 thoughts on “Tinsel Doll Part I”