Summers usually find me accomplishing far more knitting than writing. This summer is no exception. In some ways, however, I’ve still been able to hobnob with my book characters, since the items I knitted were for them. Here’s a snapshot of where I left them (and you) in Part I:

Shortly after that post, I completed Tinsel’s face and hair… 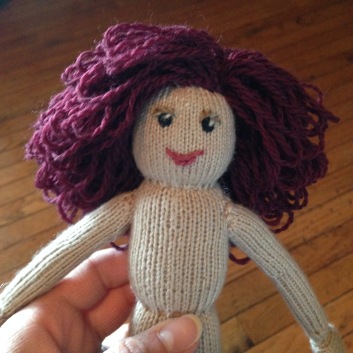 …and then felt like I was staring at Adam and Eve.

Er…let’s get some clothes on these kids, shall we?!

Again, the patterns I used come from Knitted Pirates, Princesses, Witches, Wizards, & Fairies, but every single item I’ve tweaked in some way.

Tinsel’s skirt (above left) came from the pattern to create the skirt in the above-right picture, but I made it shorter and added color work along the hem instead of the design in the original pattern. Then I added a snap at the back, rather than the called-for knitted bobble button (see Niklas’s lederhosen below).

I knit Tinsel’s bodice bigger around, knowing it would have to fit over part of her shirt, and I made the center ribbed section wider with the intent of later adding lacing, like real-life dirndl bodices. 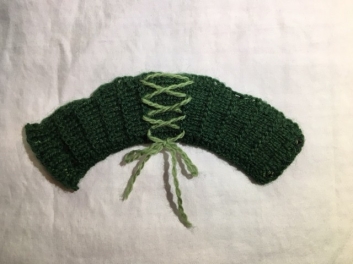 The pattern called for the edge seams to be sewn together and the bodice slipped over the doll’s body, but I opted for sewing snaps on the back, instead, so I wouldn’t have to manipulate the doll or the piece of clothing.

Niklas’s shirt I knit before Tinsel’s, knowing I wanted to tweak hers. I made his longer in the body (even then, I should have knit at least another two rows) and relied on my knowledge of short row shaping to angle the top edge of each sleeve so they would come out at a 45-degree angle from the body of the shirt rather than a 90-degree angle. 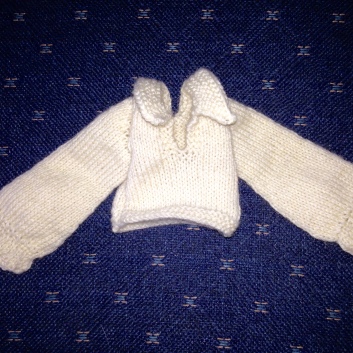 And here’s Tinsel’s version of this shirt…

For Niklas’s lederhosen, I not only knitted the pants longer than the original pattern, but I also wanted that stripe of color along the sides. 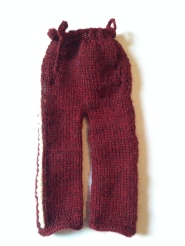 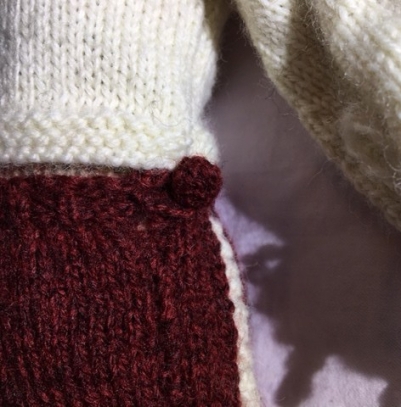 The bobble button I chose to forgo on Tinsel’s skirt. 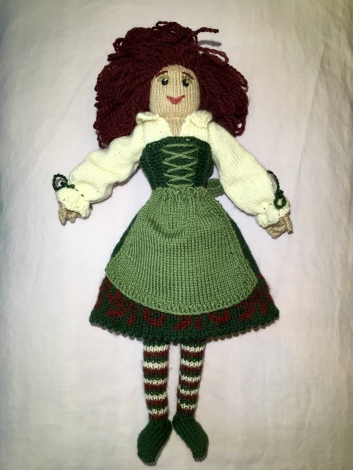 I plan to add some beaded detail to the skirt…

Yes, these kids need shoes. And coats. Clearly, a Part III’s coming at some point. The shoes look intimidating, though, and the coat I want to knit Tinsel will require a lot of tweaking…which I wasn’t in the mood to do just yet…so I started with Niklas’s coat. Oh. My. Goodness. What a huge undertaking! I’m only halfway done with it, and I’d guess it’s taken me longer to knit this first half than all these other clothes combined.

Let’s just say it begins with 200 stitches and slowly decreases by ten stitches every several rows. 200 tiny stitches. That’s more than I worked with when knitting my daughters’ blankets! Rest assured I’ll share the beast when I’m done.

Until then, happy crafting!

Celebrating Beauty Even When It Isn’t Pretty