Before I hand things over to Ellowyne, I just want to thank the Lord for helping me complete this project that’s been two years in the making. I’ve prayed over this porch every step of the way—from prayers that I wouldn’t fudge on the detailed painting to prayers that I would make the correct cuts to prayers that I could drill straight holes, etc.—and I just have to point out the obvious: God answered every prayer.

He gave me steady hands when I used the drill—especially during the more stressful moments when I had to attach the brace for the swing, when I attached the railings to the posts, and when I fastened the roof to the back wall. He gave me strength and judgment several times when I had to wrestle with the roof and a free-standing wall (not yet attached to the base and propped up only by a child’s chair) to insure they would mount properly with the porch posts before I could begin securing things together. And considering I had never attempted such a project before, it was only through God downloading His creativity into me via insights, epiphanies, and good advice from my hubby and my dad that allowed all the different pieces of this porch to actually fit together in the end! So, THANK YOU, LORD, for being present in the details.

(And thanks to Mike Harrison for letting me use his drill press, without which I couldn’t have created my railings!)

Ellowyne? Do you have anything to add?

Well, of course I do! Let’s not forget all the help we dolls gave you at the end, there! I’ve got pictures documenting it all. See for yourself:

Laurie’s oldest daughter initially came up with the idea for a porch when Laurie was pondering future diorama possibilities (this was before my shelves in the dining room were even in the lineup). Laurie then told her mother in MA about the idea, her mother later shared the idea with Laurie’s aunt in TN during a visit, and you know what Aunt Fran said? “Every porch needs a swing.” So she bought a cedar swing originally intended to hold birdseed, fashioned cushions for the swing, and sent it on to Laurie in MT. More than a year later, that swing finally has a home. 🙂

Laurie knew she eventually wanted lanterns to flank the front door, but they had to be the correct scale, so naturally the prevalent three-inch lanterns she could find just about anywhere wouldn’t do. At last she scored after this past Christmas season when she found on clearance a set of twelve plastic lanterns fitted with a string of Christmas lights. The easy part was in popping off the lanterns from the mini light bulbs. The hard part was figuring out how she wanted to attach the lanterns to the back wall and how she could make them light up—because we dolls need functioning lanterns, after all! In the end, she used cup hooks screwed into the wall, black chain links, some black wire, and mini, battery-operated party lights that she can change out when the batteries die (or change the batteries—whichever one is a cheaper fix!).

The railings are made from trim bought at the hardware store and lots of spindles ordered online from a craft supply store. Using Mike’s drill press, Laurie drilled holes into the flat side of the trim and, after painting all required pieces, she glued the spindles into the holes. The railings were later attached to the posts (originally stair balusters) via small nails used as pegs for precision fit and strength. Strength, you ask? Well, you see how Mistletoe and Tori treat the railings! 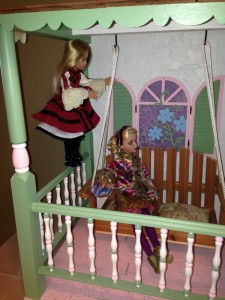 Two things Laurie had to keep in mind when creating this porch:

All in all, we dolls are as pleased as inanimate objects can be over the completion of our front porch! As you can see, we didn’t waste time decorating for autumn…

…since in a few days we’ll be bringing out the Christmas decorations (yeah, we do that early in this household!). I’m thinking strings of Christmas lights around the railings…a wreath on the door…and maybe we can wedge a Christmas tree over there in the corner! What do you say, Laurie? Think you can find us a twenty-two-inch Christmas tree?

Oh, and I wanted to discuss with you some plans for a possible back porch, now that you know how to go about making these structures. A balcony might be nice down the road, too—

One thought on “Finally…A Front Porch!”