But first, an update!

I can now share two more contest results with you: I didn’t win. 😛

After I have a chance to read over my entry for the Guideposts’ short story contest and retweak some things (cuz that’s what writers love to do—tweak, tweak, and more tweak), I’ll share it here. A part of me was disappointed I wasn’t chosen, but in reality, learning more about how to write short stories doesn’t hugely interest me. I was open to the idea, if God had wanted me to go in that direction, but at the moment, it seems He’s good with me plodding along on my novel-length WIP (work-in-progress). So plod-along I shall go.

The second contest was for my book, Tinsel in a Tangle. It was an international contest with no cap on the copyright date, so who knows how many entries I was up against, but some tears were definitely shed when I learned I didn’t make the cut. That said, I’m happy to report the results didn’t plunge me into a depression. They didn’t make me question my ability to write or even if I should be writing–two things that might have happened as little as six months ago. I’d like to think this means I’m growing. Growing in self-confidence, growing out of self-doubt, growing in my relationship with and understanding of God. He’s slowly helping me to grasp on a deeper level that though a part of me craves validation from the writing community as an author, the amount I receive—whether a lot or a little—will never be enough for my human nature. Just gaining that bit of insight is extremely freeing, odd as that may sound. It allows me to mentally unclasp my fingers from the world, turn on my heel, and cling, instead, to God. It’s His validation that only matters in the end, and He’s already given it many times in both big and little ways. It’s time to rest in that assurance, absorb it, own it, so that on days when life and the enemy try to strip me of confidence, try to push me back into the waters of doubt…they won’t succeed for long.

Okay, on to what you really came to see. Pictures! 😉

I had mentioned a few months ago I wanted to try a smaller version of the Ravenna Satchel by Marta McCall. But this time, rather than using her flower pattern, I transferred this picture I found on Pinterest to graph paper and used it as a template. Knitting the template into reality, however, became quite the frustrating mess at times, as I had to deal with so many different colors and make sure not to tangle all the strands at the back. Several rows found me switching between colors as many as fifteen times, which sloooows down the knitting process. I also changed how the handles would connect to the bag. In a sense, they don’t connect, except as an anchor point in four places near the top. Instead, they travel around, behind, and under the bag, to give it support without pulling on the felted yarn itself. (Going under would have been so helpful on my original bag, considering how much I load it up when traveling. :)) The one thing I wish I’d done differently on this second bag was to cover the straps with fabric, as I’d done on the original one. But I plan to felt some flowers (a first for me) and attach them over the few anchor stitches, so maybe that will offset the lackluster look of the straps.

You can see the graph paper in the background here. 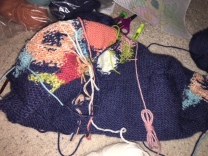 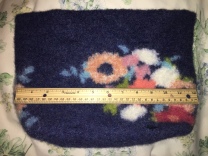 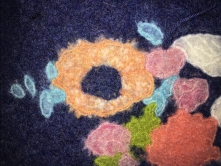 Not quite finished the needle-felt. 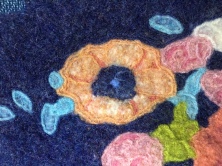 Here it is, complete. 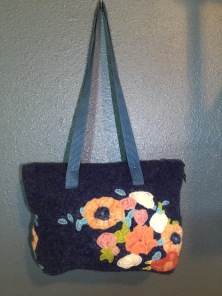 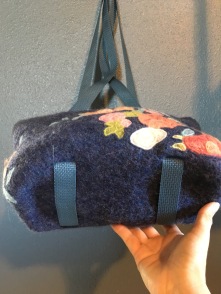 Straps to support the bottom. 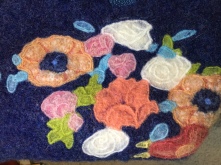 Close-up of the design. 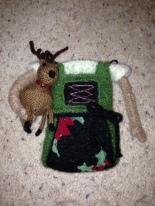 Two years ago, I had knit a Tinsel carrier for my iPhone 5. Since then, my phone went kaput thanks to a software update, and I now have an iPhone 6. Which is too big for Tinsel. 😦 In making a new carrier last year, I had used fabric for the skirt instead of felting the whole thing, thinking it might look better.

So this summer, I knit another one, but instead of a reindeer, the girl is holding a wreath. These patterns are found in Sue Stratford’s Mini Christmas Knits, though I changed the size of the inside wire frame because I needed it larger than the one the pattern calls for.

But as I was scrolling through Pinterest pics for the Christmas tree idea on the skirt, I came across some of the cutest snowmen faces…and another idea was born.

So, here’s my snowman carrier. 🙂 By far the quickest one I’ve knit & felted to date. I was going to sew a string of tiny Christmas lights between his hands, but it looked too cluttered against his buttons, so I decided less was more in his case (er, pun not intended).

And there you have it. The visible results of a summer in which I got less writing done than expected. But now that the kids are back in school, I hope it’s a while before I share more knitting projects…because that means I’m writing more.

How about you? Were you able to accomplish all your summer projects this year? Technically, autumn hasn’t started yet, so you still have time to wraps things up before the colder weather blows in. Way more time, if you’re like my older sister who lives in Florida. 😉

Have a great week and stay creative! 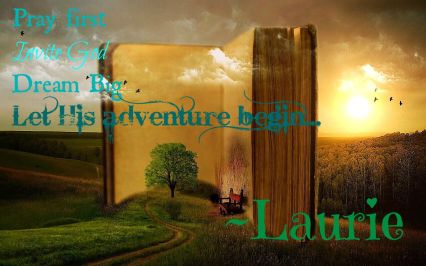