Bonjour, tout le monde! Ellowyne Wilde here with another dolly update. It almost didn’t happen this week, I’ll have you know. Laurie has been hogging the laptop in an attempt to finish the first draft of her Christmas novel (apparently the rest of the Christmas décor around here isn’t coming down until she’s accomplished that!)—but she’s no match against 16 dolls. We’ve got 256 inches to her 66; that’s a decent amount of leverage to wrestle away one little laptop.

And while Laurie’s family might have to suffer through the first half of February with green garland and reindeer figurines, we dolls in our corner of the house begin to welcome spring. I know, I know—seems odd here in Montana, but temperatures have been unusually warm these past few weeks. We just can’t help ourselves. So to pay tribute to Spring’s inevitable arrival, here is our latest accomplishment: a seat cushion boasting the lush, cheery colors of the lush, cheery season (at least, it’s lush in other parts of the country).

Now, in certain social circles, Laurie may try to take credit for making the cushion, but the following pictures show the truth of the matter, wouldn’t you agree?

Mistletoe and Tori had the job of pinning the fabric around the inner cushion, but we have since learned that leaving these two alone together produces a slew of mischief:

Following this tutorial, Ping Lei, Mistletoe and I tried sewing the pieces together, along with the piping–something I had not attempted before this project–but the rubber feed dog fell apart halfway through. I suppose it was just a matter of time, since the machine dates back to the 1970’s (how good will I look in forty years?!). To tell you the truth, I really didn’t mind waiting the week for the metal replacement to come in the mail because of what you can’t see in the picture above the sewing machine: a deer head presides over the living room. An animal hanging on the wall, no matter how dead, can be rather intimidating for a doll. I couldn’t sew fast enough, despite Mistletoe’s attempt to slow me down.

After sewing a Velcro closure along the back, we at last have our new cushion. Makes the bench look all the more inviting, n’est pas?

You’re welcome to sit for a spell, but don’t be offended if we can’t join you right away. It seems one of our party has gone missing (or hiding, depending on who you ask) and the rest of us must go in search of her.

I can’t imagine where Mistletoe has disappeared to…can you? 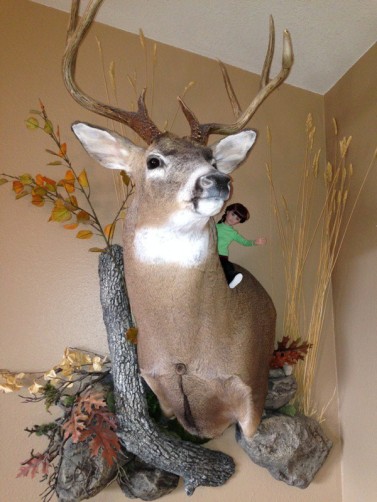