Hello, everyone! Ellowyne Wilde here. I’m back (finally!) with a quick update on how Laurie is coming along on my front porch. She’s allowed me to reveal a few snippets, assuring me she will have the whole thing completed by the end of September. Okay, so she didn’t promise. I believe the word she used was “hope.” But I have to hand it to her; she’s done more work on the porch in the last couple of weeks than she has in the last six months!

Here is the latest piece completed: the porch roof.

After calculating how many shingles she would need to make and how much wood that would entail, Laurie went about using her hubby’s table saw to cut up a 4’ x 2’ MDF board. She had finished just over half the number of shingles when she began to corral them all into a plastic bag. Well, the bag became heavier…and heavier…and heavier…

Note to self: MDF is too heavy to use for shingles when a doll’s front porch is being constructed by a non-professional.

So, Laurie moved on to balsa wood and ordered several sheets of it from an online company. They arrived a few days after she left for vacation this summer. We dolls would have had a work party while she was gone and helped her cut some shingles…except we worried about knicking our plastic and vinyl bodies with the X-acto knife. Thankfully it didn’t take her but a few days to cut the 322 shingles all by herself (8 sheets of 36” x 6” balsa wood sheets, in case you wanted to know!).

During the gluing stage…

Then came the gluing. You guessed it—she used Power Grip glue. And then came the staining, for which she used a cherry finish, along with a 1” foam brush for the shingles and a narrow craft bristle brush for all the tiny spaces in between.

And now that it’s done…we wait.

Because there are several things Laurie needs to finish before she can put all the pieces together. Like attaching the door to the doorjamb on the back wall, for instance.

I watched her working on it yesterday. She didn’t look too happy. Apparently once she screwed the hinges into the door…the door doesn’t fit into the opening anymore! So now she has to take a chisel to the doorjamb.

She had better take care of my wall!

Given that the back wall is already finished, she had better not deface my wall with a chisel gone awry!

You know, I’m beginning to wonder if I shouldn’t have hired a real carpenter in the first place—two years ago when this project first took root in that woman’s brain. At the very latest, we dolls probably could have had a completed porch by this time last year!

Of course, then Laurie wouldn’t have had all the fun in making it herself. (She doesn’t like me to remind her of the frustration involved!)

Ooo, wait! Laurie has some carpenter friends, doesn’t she? Surely they’d be willing to lend a hand to a gal in need!

Yoo-hoo! Mr. Schwaubauer! I could really use your help on something…!

Maybe I should seek out Ty Pennington. Think he’s doing anything important these days? 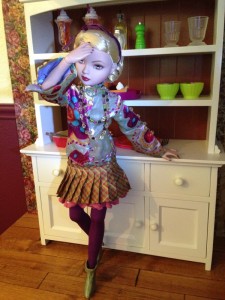 Anybody know of a reputable carpenter?

One thought on “A Teaser”

A Journey of Faith & Mental Wellness

Celebrating Beauty, even when it isn't Pretty